8CountMixer launched last June. It aimed to allow cheerleaders, coaches and their mothers to create their own cheer mix online. The website is meant to provide a $700-sounding product for $300 or less, with the trade-off being that you have to create the mix yourself (although this is viewed as a bonus by many users).   At the inception of this idea, we realized that this would disrupt the entire cheer music market, but we had reason to add fuel to the fire.

Back in 2011, we were running a campaign titled “Make An Impact”, which was just after “Leave Your Mark” and before “Dream Big” which both had greater success.  Although this campaign applied to custom music, it was really meant for something we were designing years before anyone knew about it – 8CountMixer.  Although custom music mixes featured original music and awesome voice over artists, the real impact the campaign referred to was our effort to make a broad stroke on the industry: the ability for anybody to make their own cheer music.

Carmine reflects on the project: “Aside from making the music process more readily-available for teams, we had a hunch there would be three significant side-effects from [8CountMixer].  We took these into serious consideration because they would drastically affect the cheer music market. One of the largest deciding factors to proceed was the lack of direction from the others in the industry.

I was a member of a little-known group called the Cheer Music Mixer’s Association, where almost all of the world’s cheerleading music producers used to chat about industry news.  In short, there was some foulness taking place toward the end of 2011 that only a few know about, and cheer music was honestly on the verge of collapse.  In order to best protect the future of cheer music, we had to make several large changes – one of them being the decentralization of cheerleading music production – putting production into the hands of the people.  “

After lengthy discussions throughout 2011, the development of 8CountMixer was started in 2012. Here are the three predicted side affects Carmine and his team spoke of, all of which became a reality in the first year of 8CountMixer’s launch:

1. The demand for custom music will drop significantly

Most high school and middle school teams budget up to $300 for their music. However, teams shopping for $300 custom music are unfortunately missing out on the modern cheer music experience. At $300, there is no budget for the vocalists and voice overs that today’s cheer music requires.  There is also little headroom for making edits. However, 8CountMixer’s voiceover library boasted more than 800 (now over 1,000) modern voice over clips that can be used in the mix,  and customers can edit their mix as much as they would like.

“The goal was to blow them all away”, says Carmine. “We wanted to make sure it improved upon the old way of thinking about cheer music, so we built it so teams could make music at practice, and practice to their music before ever spending a penny”. The use-it-before-you-buy-it feature continues to attract many teams.

Although CheerSounds specializes in custom music – and continues to do so – we cannot ignore the fact that 8CountMixer provides the ability to create a $700 product for $300.  It might not be for everyone, but we encourage everyone to try it out for free!

If cheer music is now a few mouse clicks within our music library, more people (mostly the ambitious athletes) are going to realize the potential to make music for others at a profit. We jokingly said every team would have one athlete who buys music on 8CountMixer and resells it to their coach for $350. Within weeks, we noticed the trend in our purchase logs.  Some of the more entrepreneurial athletes were spinning up their own businesses providing this service for multiple gyms! They can rest easy, knowing that we wrote our licensing software properly to keep them out of trouble!

3. All cheer music is expected to have original vocal content

If the $300 product now has male and female rappers, custom song arrangement and sound effect placement, then what should every product over $300 have?  The expectation of cheer music has risen once again. Custom music producers raise their prices to provide these services while 8CountMixer maintains a steady, budget-friendly rate.

What does this mean for you? It means you have a lot more awesome music available to you at the same budget as before.

Today, we unofficially launched 8CountMixer 2.0 (https://www.8countmixer.com) to get some real-world testing before the official launch.  The updated website has a faster and more organized interface, and has many more features including music effects, 70 new songs, 200 more vocals, trimming tracks from front and back, splitting mixes, multiple tempos, etc. 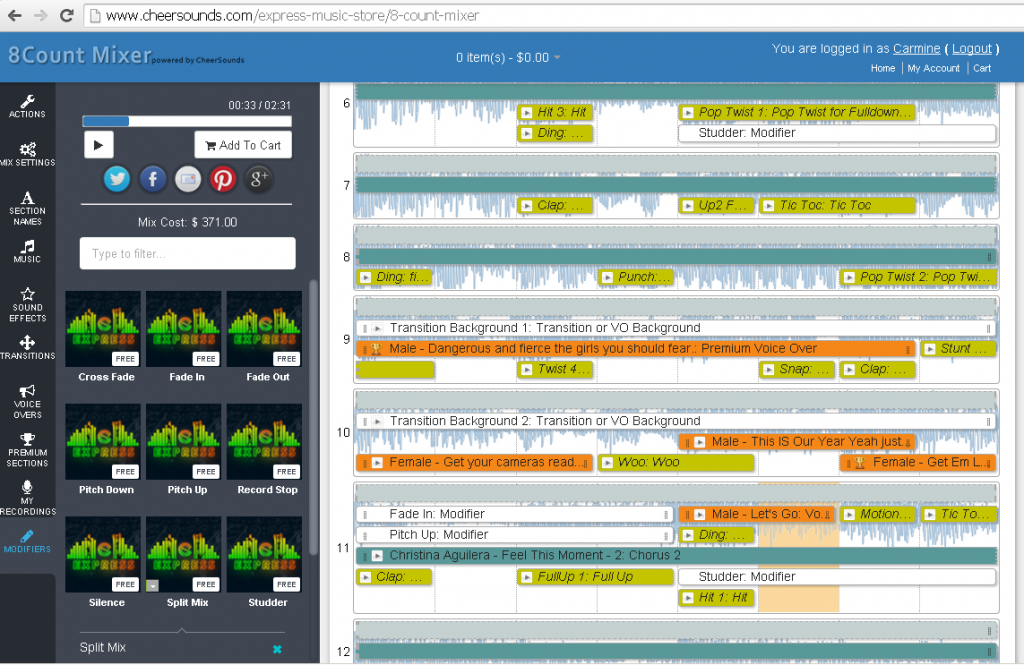 We want to thank everyone who has supported this project and we can only hope it has made your lives easier! And keep your ears open for two more launches of equal magnitude by the end of June!